The Crispi 75mm options start at the top with the XR, which is the stiffest 75mm boot on the market today and will drive any ski. The XP is Crispi's 3 buckle  on/off piste boot for those who like touring but still need to drive their ski hard. Both models have the "arch bellows" and therefore present more power to the edge of your ski than the older "accordion style" bellow design.  The Svartisen is a leather-2-strap and is the best made boot in it's class and will push any backcountry ski.(available in 75 or NNN BC)  The Antarctic is a classic 75mm Norwegian stitch design that will last you for years of touring. While other boot companies are making their boots more cheaply, they don'y last under the rigors of skiing like the Crispis. Buy hand-made Italian made Crispi in leather. 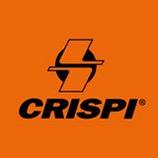 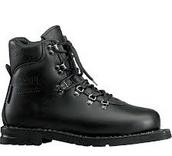 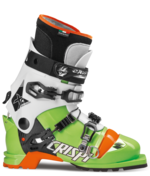 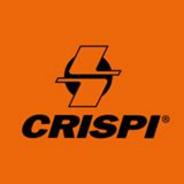 Crispi NTN Boots are the best in the industry for performance, price and fit. The Crispi boots were designed specifically for the active nature of the NTN bindings so they match well for power and don't "mush-out" when the bellows engage. Crispi is THE ONLY company who designed their boots with tech fittings on the toe and in the heel, so the Crispi models will convert to NTN alpine heel options as well. You won't get that with any other boot companies models.  The Crispi "arch" bellows also make a huge difference in your NTN experience. The 4 buckle World Cup is the stiffest flex available for any NTN boot. The Evo is considered by many to be the best all-mountain model on the market and the Shiver is designed for touring and is considered the best all around model for women under 150 lbs and is a 3 buckle option and is the lightest NTN boot on the market.

Fey Bros Freeheelgear Distributors is the North American distributor for All Crispi Telemark and Backcountry leather 75mm and NNN boots.